After reviewing the “to-do” list – you know the one, that never ending list of boating jobs that despite how many things you cross off, just keeps getting longer and longer, I have decided to categorise the items into two groups.  First group is upgrades.  These are items that previously didn’t exist on La Mouette and cover things such as the roller furling, stereo system, electric pump in the galley etc.  The other category is the refurbs which cover existing items, and will be an R&R or a rebuild.  The reasoning behind this is that it’s all too easy to spend money on new, shiny things which give you a warm glow and a nice feeling after bolting them to your boat but invariably, the new, shiny thing is sitting next to an old, faded and disintegrating item that probably needs more attention than something that previously didn’t exist and could have probably been postponed.

Last weekend we managed to get a day on the boat just futzing about and not really doing anything, and it was extremely obvious that the starboard wooden rub rail was in desperate need of attention.  Some of the screws weren’t holding it in place and it needed a jolly good scraping, sanding and half a dozen coats of Cetol.  All in all, a weekend’s work.  It’s probably way more important to do jobs like this rather than spend money and do the easy jobs which essentially is to fit new equipment.

To become the blue water cruiser that we want this boat to be, both categories of work need to be done.  But the refurb stuff is increasingly becoming more important.  One reason is to stop any further deterioration, eg wooden things, metal things and fibreglass things are particularly prone to the laws of entropy.  And we all know that on a boat entropy has been turbocharged by the surrounding salt water.  Not only do we want a blue water cruiser, we also want that nice gin palace.  Yes, the venerable Compass 28 is so versatile that it can cover both roles.  And to be honest, having a nice looking boat, both inside and out, makes weekends away all the more enticing.  It’s not just the sailing but spending evenings in the cockpit watching sunsets etc that makes boating such a pleasure.

Okay, so it’s out with the scrapers and sanding machine and sort out that pesky toerail.  La Mouette’s new berth at Akuna Bay has the starboard side alongside the finger wharf, so access is more than easy, plus a power outlet nearby.  There are no more excuses.

I reckon that if we get two refurb jobs done for every upgrade job, things will progress quite nicely.  Not only that, refurb jobs such as the toerail, although work and time intensive, are quite cheap as we already have all the bits and pieces to do them.  Similarly with the fibreglass jobs.  I had a big spending spree on fibreglassing stuff when I did a stanchion base last year and bought quite a bit of stuff which should last a while.  The stanchion bases need some work and there are a lot of divots missing out of the gelcoat that need doing also.  Might have to buy a battery powered dremel but that’s about it.  That way we can take the boat out for a weekend and the jobs can be done at anchor or on a mooring ball just about anywhere.

Top of the hit list for the refurb jobs is the aforementioned toerail followed up by much needed maintenance work on the winches ie pull them apart, clean the bits and then re-assemble with new grease.  After these two jobs, an auxiliary switch panel with three switches that I have been working on can be installed.  Actually there is quite a bit of work involved in this.  I installed a new distribution panel a month ago as one of the fuse holders had broken.  The panel has only got six switches but we need more.  A galley pump and then some cooling fans will require two extra switches.  I have cut down the old distribution panel and bought three new switches and fuses to install into it.  After spray painting the new mini-panel and installing the switches and fuses it can be mounted next the existing panel.  However, this requires removing the wooden door where the current distribution panel and engine dashboard are sitting, and cutting out a new hole.  One of the laws of boating has it that if you start a job, it invariably leads to another job in order to finish the first which in turn will lead onto something else.  This is in fact happening with the mini-distribution panel.  After I enlarge the cut-out, I will have to re-locate the 12 volt power socket, but then there will be half a hole left right next to where the panel goes.  To fix this, I will need to buy a double 12 volt socket and butt it up beside the mini-panel, thus hiding the hole.  This in turn means extra wiring for the additional socket!  The timber on the door itself also needs revarnishing.  The laws of the universe are working as per usual.  But, by the time this is all finished we will be able to enjoy flowing water at the turn of a tap and deliciously cool air being wafted around by fans.  Suddenly all the work involved in refurbishing that toe rail looks nice and easy.

Using this philosophy, items such as the teak grab handles that I have got planned for around the inside of the saloon and on the companionway, will be done at a later date.  They are important and are totally necessary, but refurbishing sad and sorry existing items is much more important.

You may have noticed that I haven’t put up any pictures to go with this blog.  It’s all a bit philosophical and esoteric, this prioritising of boat maintenance projects, and it’s just as important as actually doing them.  I sometimes wonder if Neptune is laughing at us when we spend so much time doing maintenance and not enough time out there on the briny sea.  However, whilst we are tied up at the Marina, heads down and bums up in the bilge fixing things, Neptune can’t get us, but then we aren’t really being sailors are we?  Fixing things out at sea whilst wrestling with sea serpents and fighting off pirates truly makes us sailors.  But more about sea serpents, pirates and varnishing toe rails (with pictures) next time.

Oh Okay, here’s a picture … Dennis and myself about La Mouette 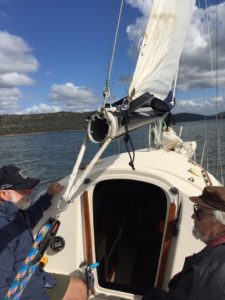