The last blog was about time and how it seems to slip through our fingers like sand, or alternatively, there isn’t enough of it to hold in your hand. But we seem to be through the tunnel and are now able to devote weekends to La Mouette.  After a hectic couple of months with work commitments, a holiday, Pipeband stuff, Deb’s Mother being in hospital as well as moving out of my flat, things have stabilised somewhat and we can now spend some of that precious time on La Mouette.  This weekend saw us actually spending two nights on board and we achieved some big things.

It’s always a big event having the engine removed from anything – the car or the motorcycle.  The boat is certainly no exception.  We woke up on Sunday morning with the feeling of expectation.  Today is the day!  By the time we go to bed that night the engine will have been taken out of the boat, come hell or high water (hopefully no high water in the bilge).  Over the past few months, I had stripped of a lot off bits such as the alternator, starter, exhaust elbow, water pump, crank handle assembly and fuel tank (the Yanmar YSE8 still had its original red 5 litre fuel  tank sitting on top of the engine) – mainly to lighten it up somewhat so as to make it easier to hoist out.  All that remained now was to remove the engine mount bolts and disconnect the propeller shaft.  One of the scariest things through this whole process was the fear of rusted nuts and bolts.  When heaving on a tight nut or bolt there was always the fear that shaft would snap due to the threads being rusted in solid, but fortunately, everything came out with no dramas.  I had been pro-active and sprayed everything with various penetrating fluids.  I was recommended a product called Reducteur – which came in a spray can.  It was readily available from Bunnings, a big chain hardware store here in Aussie.  It was expensive at thirty bucks a can but it did the job.  Not one rusted in bolt and nothing snapped or broken.  Only one screw refused to come out, and that was on the throttle linkage but I could still get the linkage out and will drill out the pesky screw later on and replace it. 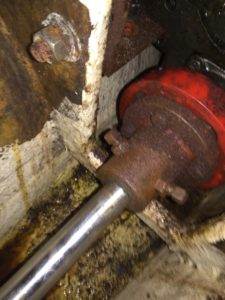 The propeller shaft bolts came undone very easily, considering the amount of surface rust over everything. That was it – everything disconnected and undone.  The engine could now come straight out.  I had bought a chain block lifting device from Flea-bay and I rigged that up to the boom.  The Compass 28 has a key-hole hatch on the cockpit bulkhead.  They didn’t come with the sliding hatch in the cabin roof, so it’s not a direct lift upwards for the engine.  The chain coming off the boom and down in the engine compartment was rubbing against the top of the hatch, but a bit of carpet was placed there to protect the gelcoat.  A couple of friends, Dennis and Andrew came over to help and with Andrew in the engine bay, Dennis on the chain block and myself in the companionway to guide the engine we started.  The engine has to come up, across a bit and then up again before it’s in the cockpit.  It all went smoothly, in less than 15 minutes we had the engine sitting on a couple of bits of wood in the cockpit and after readjusting the boom sling etc a few minutes later it was sitting in a wheelbarrow on the wharf.  I just can imagine how difficult this would be with anything bigger.  Whilst the YSE8 engines are old and made of lots of cast iron, giving them a weight of approximately 140 kg, it’s still a struggle.  But we managed to get it out and into the carpark by ourselves, a job which would be damn near impossible with a large multicylinder engine in a larger boat.   Who said larger boats are more comfortable – try man-handling a 4 cylinder diesel around! 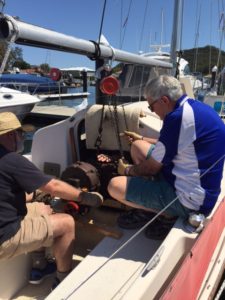 With that job done, I can now clean out the engine bay, replace bilge hoses etc and generally clean it all up. The engine will be taken up to Newcastle to get the gear box fixed and then I can put a lick of paint on it and do a few other things such as clean out the waterways etc.  A previous owner had disconnected the hand cranking mechanism, but I will be re-installing it.  One of the advantages of a small, simple engine is that it can be started by hand cranking.

With the engine out and ready to be sent off the get the gearbox fixed, it was time to turn our attention to some of the exterior woodwork, the washboards and hand railings. We got busy scrapping off the old coatings which were a mixture of Cetol and Penetrol.  A combination that had been slapped onto the highly weathered woodwork to make it presentable for sale.  It didn’t look to bad originally, but 12 months later the coating(s) were peeling off and the wood starting to grey.  It became a race as the weather had been pretty terrible all weekend with rain predicted for Monday (a public holiday).  As we scrapped and sanded away, we kept one eye on the approaching storm clouds.  The surrounding towns of Woy Woy and Ettalong got the rain but fortunately Booker Bay didn’t.  By the end of the afternoon we had one coat of Cetol on the washboards and handrails.  The next 3 or four coats will go on over the next week or so. 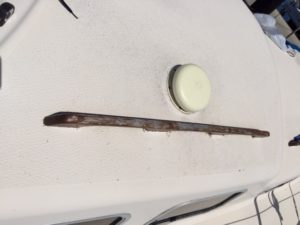 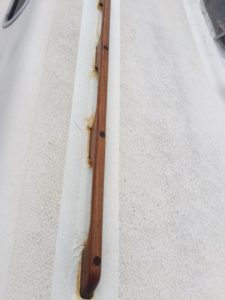 All in all it was quite a productive weekend. Going from not being able to spend any time with the boat for a month or so, to getting quite a bit done.  Once the gearbox is fixed, the next major hurdle is actually getting the engine back into the boat, then we have to get it going.  The learning curve is steep and we haven’t stopped climbing.  We will have to learn new skills such as bleeding the fuel system – a skill that every sailor needs to know.

But more on that next time.