Since the last blog, La Mouette has had a change of address.  No longer a resident of Booker Bay, she is now happily berthed at Akuna Bay, a wee inlet off Coal and Candle Creek, one of the waterways that come off Cowan Creek.  It’s a flash marina and one of the D’Albora family of marinas – a big change from the previous marina.  It appears that La Mouette has had a few different homes in her past, Sydney Harbour, Pittwater and then Brisbane Water, and now Akuna.

Hopefully, the new marina will mean that we get out on the boat a lot more.  The biggest plus for Akuna Bay is that the water is really quiet.  No rip roaring currents and tides to contend with.  The high cliffs around the area shelter the bay from the wind and all in all, docking should now be a pleasant experience, not the heart in mouth stuff that it was at Booker Bay.  No more getting slammed into nearby boats as had happened a couple of times.  No more boats slamming into us, as had also happened on a few occasions.  No more coming down to the marina only to find a few more battle scars.  We had organised the berth several weeks before the actual move, and the fact that it took a week and a half to find a day with a suitable outgoing tide from Brisbane Water and favourable weather speaks volumes for the need to move.  The other major factor was the drive up to Booker Bay from Northmead.  On a good day it took an hour ten minutes.  On a bad day with heavy traffic on Pennant Hills Road and the motorway it could take an hour and a half.  The drive to Akuna Bay is now approximately 50 minutes, but it’s too early to tell whether this will be the average time or not.

We were going to move the boat on a Sunday, but the weather prediction was 30 knot winds from the South East and a big swell out on Broken Bay.  That would have made the navigation of the Brisbane Water Channel interesting to say the least.  The Wednesday after had a favourable tide and winds lightening up as the day went on.  We made the usual mad dash home on Tuesday night, threw our stuff in the car and headed out to the marina to spend the night aboard so we could get an early start in the morning.

The high tide was scheduled for 9:15 in the morning and we planned to sail at about 9:30, this would mean that the currents around the marina would be quiet, a good time to leave.  With everything rigged and stowed we left the marina for the last time.  It was the end of an era, old Keith, the previous owner had lived aboard at Booker Bay for a few years and we had been there a couple of years after that.  Booker Bay wasn’t a bad spot, but in this case, the grass was definitely greener in Akuna Bay.  The run past Hardy’s Bay and down the Brisbane Water Channel went well but we were extremely mindful of the recent reputation that had built up about the Channel as we approached Lobster Beach.  The local ferries had stopped running in this stretch of water over the last few weeks, as the channel was getting shallower.  La Mouette draws 4’ 2” and we should be OK on the high tide if we were careful in the channel.  Bearing in mind that the weather hadn’t been very good over the previous few days, we were wondering what awaited us in Broken Bay.  As we motored up past the dreaded Lobster Beach we stuck up the main sail in preparation for hitting the bar and out onto Broken Bay.  Having the main up would stabilise the boat in the swell, plus it was also a bit of an insurance policy should the motor die in an awkward spot. 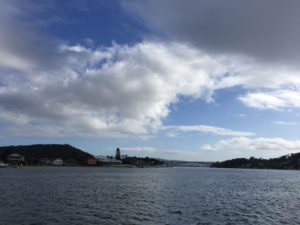 Past Lobster Beach and Half Tide Rocks, we could see the last navigation marker and there were waves breaking on the bar – we would have to go through that!  It was upon us before we knew it, however, the venerable Compass took it in its stride.  The waves slowed us down but the engine and sail powered us on to the next wave and after half a dozen breakers, we were finally out of the channel and heading towards Lion Island.  There was quite a swell running and we debated the height.  Was it five metres or just three?  Either way, it was quite rolly but this stretch of water was always like this.

Crossing the bar at Box Head 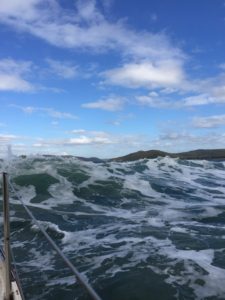 Once past Lion Island and in its lee, we hoisted up the jib and set sail for Akuna Bay.  However, as exciting as it sounds to be free of the god of diesel and be under full sail, we still needed the motor.  The wind was flukey and not at all strong.  This was the first time that we had hoisted this particular jib, and it appeared that it wasn’t really suited for this boat.  We definitely didn’t like the cut of this jib.  Although the boat came with a complete set of sails: jib, storm jib, working jib and a genoa; none of them seemed to be really suited to our boat – and a furler with a new headsail abruptly moved up the list of things we needed.  After a quick sail change we were finally sailing and we had that magic moment when you switch the engine off.  Silence with just the sound of the water, waves and wind.  We sailed for probably an hour or so, and by the time we were level with Patonga it was time to switch the engine back on as the wind was dying and most of the time on the nose.

We motored the rest of the way, up past Refuge and America Bays; past Hallet’s Beach with a left hand turn at Cottage Point into Coal and Candle Creek.  We were nearing our new home.  A quick phone call to D’Albora before the phone reception died ensured they knew we were on our way and there would be someone there to greet us and catch our dock lines.  The last half hour of motoring was like going up a Norwegian fjiord.  This is a really beautiful part of the world, and although taking the boat out for a sail would involve a half hour motoring up Coal and Candle Creek each time, it was still a better option than the tricky Brisbane Water Channel. 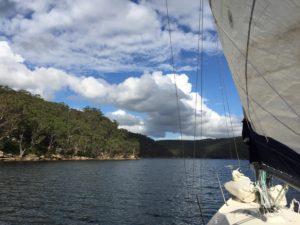 Before we knew it, we were at the marina and heading up the channel.  Berth B23, our new home was at the far end, but the water was calm, and so were our nerves.  This was our first time docking here so there would only be one attempt at getting the boat in the berth, no preliminary sweeps to check out the conditions, and no aborted attempts where you go back and try again.  It was one go and that was it.  As we turned the corner we could see Lars waiting for us on the finger berth and I headed towards him.  I had throttled back and we were just making weigh.  With about 20 yards to go, I put the gearbox in neutral and we drifted towards the berth.  Almost there, it was a hard to starboard on the tiller and then into reverse, our version of putting the handbrake on.  We got there in the end with a slight bump but with definitely no points awarded for style.  Nevermind, we were tied up and now it was the obligatory clean up and stowing away of stuff.  Somethings just don’t change.  We had done a car shuffle the night before so that we had transport home, but had one last trip back to Booker Bay to pick up our other car. 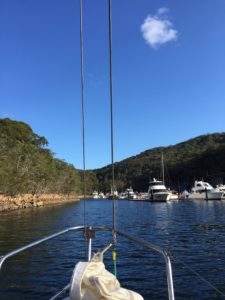 Approaching the channel at D’Albora Marina

A new era had begun.  Watch this space for further adventures of La Mouette and her crew.  But more of that next time. 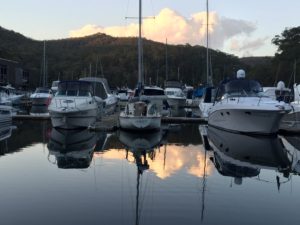