As soon as one major project is finished, the next one is champing at the bit to get started, or recommenced, or finished, or something. We have known for some time that the batteries were just about dead.  The main house battery hasn’t been holding a charge for some time and the smaller starting battery is probably near the end of its life also.  The designations for which battery is the house and which is the starter are purely mine.  Old Keith, the previous owner is no longer around and has gone off on the great eternal cruise, so apart from whipping out the Ouija board, there is no way of knowing what he had in mind when he began modifying the electrical system on The Gull.  I believe it was Keith that put the dual battery system in, as well as upgrading the lights to LED.  The folder that we inherited when we first took ownership of the boat tells the story of the last couple of decades of La Mouette.  It is full of receipts and instruction books, surveys and sales brochures.  It is a very interesting read indeed, and from reading between the lines, and a close examination of purchases, much can be revealed.  For instance, the rust in the gearbox we encountered was due to salt water ingress and we have discovered receipts where the gearbox was repeatedly flushed to get all the salt water out.  We still have no idea how it got in there in the first place but there are lots of blanks that we would desperately love to have filled in.  The sales brochure from a boat broker that is about 10 years old plus various survey pictures show us a slightly different boat to the one I am currently the owner of.  It’s not that dissimilar, but there are lots of little differences, mainly cosmetic, but the distribution panel is different, as are the curtains, cushion covers.  Telling the story of some overhauls by Keith.

Ten years, however, is a long time in boat years, so it’s not really surprising that it’s now time for a major refit of all of The Gull’s systems. The rigging and mast have been done, the engine has just been overhauled and now it’s time for the electrical system.  At this stage everything is pretty much an open book – do I completely strip every last wire, switch, relay and fuse out of the boat and begin from scratch with a new system, or do I break it down into sections and replace them one at t a time?  What electronic gizmos do I want to incorporate in this brave new world, or is it just the same system as before but newer?  Well solar charging is definitely on the agenda as is a stereo system.  I have a portable blue tooth speaker box, and it pumps out great sound but the battery only lasts a half hour before it needs recharging.  Music is important, so I think a stereo, probably with Bluetooth, and decent speakers are definitely on the agenda.  New radios are also on the list as is a new distribution panel.  The old one is one of those cheap rocker switch types you see in the chain chandleries for about $35.  The other big question is do I do it myself or pay someone of unknown quantity or quality to do it for me?

Truth be known, I am not an expert on electrics. The wiring diagrams that I have been looking at are very abstract and no doubt that people more experienced in electrical matters than I can read them very well.  I am also struggling with a lot of stuff such as bus bars and where do you put them,   I do have the wonderful Nigel Calder book on Boat Maintenance, plus a few other books on refitting marine electrical systems but they all seem very confusing.  Hours and hours of research are paying dividends bluand some of the fog is clearing but it’s a long and winding road.  I have learnt a lot of things however, which leads me even more in the direction of a total rewire.  For instance, the main power feed to the distribution panel comes from the engine ignition switch.  Yes, that’s right, there is a red wire coming from one of the ignition terminals up to the panel when it should be coming from the battery switch and have a fuse somewhere along the wire. 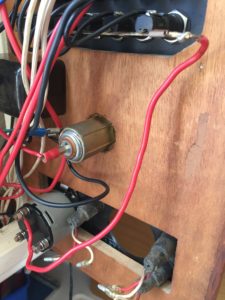 I have noticed that there has been a distinct lack of fuses. The automatic bilge pump was connected straight to the battery with no fuse.  I installed an inline fuse early in the piece.  It seems to be a common feature of boat ownership in that you spend a lot of time and resources fixing up dodgy repair work from previous owners.  I would guess that the reason why a  lot of people end up with DIY electrics (and a lot of other stuff) is because the boating industry is so expensive.  Maybe if goods and services were a bit cheaper, and more reliable and trustworthy, then boat owners would make more use of professionals – and they wouldn’t have to charge as much.  But this is fairy tale stuff – like living happily ever after!

The basic theory in the coming electrical refit is to keep everything as simple as possible. Not too many complex systems.  There will be interior lighting of course, the outside boaty type lights, radios and of course engine electrics.  A solar charging system and a few nav instruments and that’s about it.  We will probably get a fridge one day, so provision for a few other items will be built into the system.  The major change that is planned is to create an electronics station just above the port quarter berth.  I will make up a wooden panel where the new distribution switch, radios, stereo, 12 volt outlets etc will go.  The engine dashboard will remain in the port inside companion way bulkhead where it is and possibly a couple of engine gauges. The system will be totally DC of course – shore power currently consists of an extension lead and a power board.  It will stay this way – no shore power when you are on the hook or on the mooring.  It’s only at marinas you have access to shore power, so we don’t really believe that a complete electrical system is really justified for those odd occasions.  Besides “off the grid” means “off the grid”.  The only thing holding us to the dock should be the mooring lines.  Certainly not power cables.