What started out as a dodgy gearbox in the Yanmar soon escalated. As previously described, we removed the engine from the Gull and dropped it off at the diesel workshop, Minards Diesel up in Newcastle.  I had a really good chat with Neil, the guy who would be working on the old clunker and he really knew his stuff.

Neil also recommended getting some head work done. Apparently you have to change the head gasket every five years or so, so I said, “sure, go ahead”.  Might as well make the most of it while the engine is out and I drove off with high hopes.  However, those hopes were soon dashed upon the rocks, and then giving a good pounding by a couple of rogue waves.  After being left high and dry, what was left of those hopes ended up dried and shriveled like a piece of seaweed in the sun.

A few days later Neil rang with the bad news. It looked like that at some stage the gearbox had had water in it with the result that everything was rusty.  The gears, bearings, clutch and flywheel.  And not just a light coating, but really rusty. 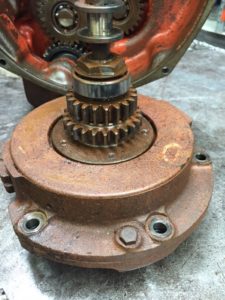 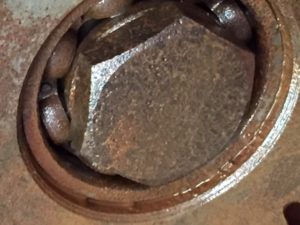 I seem to dimly remember some documents that came with the boat mentioning the gearbox being flushed a few times to get the water out. I wonder what happened and how water could possibly get from the outside of the boat to inside the gearbox.  It turns out that the spare motor someone gave me a few months ago, wasn’t a YSE model but in fact a YSB.  They have an alloy gearbox casing and bell housing compared to the cast iron of the E model  so I wasn’t able to do a straight swap with the gearbox.  Not looking good.

A week later Neil rang again. It was like one of the phone calls you get notifying you that a family member is now deceased.  The rear thrust washer on the crank was dodgy and there was a deep score mark on the rear crank journal.  This basically meant that the crank was knackered.  Cranks for the old Yanmars are now as rare as the proverbial hen’s teeth.  If you can’t get one, the engine isn’t much better than a boat anchor.  Meanwhile, the dollar signs were flashing before my eyes.

Fingers crossed that the YSB engine at home has a crank that is useable. I am not a gambling man and I couldn’t even make a start on guessing the odds on this.  All I can do is say a little prayer to the god or goddess.  Would you say a prayer to Neptune or Poseidon?  After all they are the gods of the sea, not diesel engines.  Is there a god or a patron saint of diesel engines?  A quick visit to Doctor Google revealed that Saint Catherine of Alexandria is the patron saint of mechanics but no actual saint who looks after diesels.  Well then, I will still say the prayer, and maybe sacrifice an animal or two as well as a few libations – possibly when the moon is full.  With no actual god, goddess or saint to look after the old Yanmar engines, it’s no wonder that these engines are difficult to resurrect.  All the resurrections in the Bible were done by various gods, and without your deity, you are basically up the creek, with no paddle, nor engine – drifting at the mercy of the currents and tides.

Did I mention that the head wasn’t in good shape either, necessitating a replacement, as well as the cylinder liner being glazed and a new piston also on the list of replacement parts? In other words, a total rebuild.  Not what the doctor ordered.  I was hoping to get it going again with minimal parts, and maybe get a year or two out of it before repowering with one of those shiny red Beta engines.  A newer more powerful engine to push against all those tides and currents.  Anyway, if the old clunker can get a new lease on life, I should be looking at another 4 or 5 years, or even more, before I need the Beta.  In the meantime, I can get in the fix up the engine bay.  It was quite a mess, with lots of grunge, grime and mould. 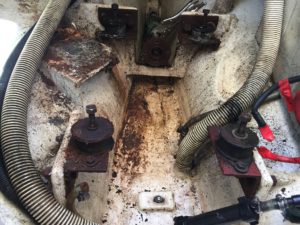 All of the above makes the engine sound like it shouldn’t have been going as long as it has. That’s the big mystery.  Up until the gearbox started slipping in Paddy’s Channel, it was a really reliable engine.  It always started as soon as you hit the starter button – and that’s the big thing with diesels.

They don’t start easily if there are problems in the top end, and this one started easier and quicker than my BMW motorbike. To go from a reliable engine, even if it didn’t look as clean and shiny as it should have been to a total basket case is one of those mysteries that ranks up with the Loch Ness Monster and Bermuda Triangle.  Maybe that afternoon in Paddy’s Channel was its death throws.  It just faded away instead of dying with a bang and a clunk and a puff of smoke.

Will the spare crank turn out to be in a useable condition? Will Neil find anything else wrong with the old clunker? More on that next time.