Sometimes it’s really tough to sit down and write another blog especially when there is a bit of a gap since the last one. You would think that over a period of time there would be more to write about, however, sometimes the boatwork isn’t all that interesting and trying to write a scintillating blog about how you fixed the sink plug isn’t something that you can write very much about. In this case, a lot has happened since the last blog hit the ether. La Mouette has undergone some pretty dramatic changes over the last month or so. Paradoxically, the really big changes that have occurred over the last twelve months such as an engine rebuild and a lot of work to the hull are quite unnoticeable. Passers-by on the marina wharf wouldn’t notice that anything has happened, and a casual observer looking inside the hatch would see a few changes. The casual observer would notice that the carpeting on the hull inners have been replaced. There are now dishes in the dishrack – a brand new Corelle ware dinner set. There is a fridge on board. The wooden trim around the companion way hatch has a nice glossy finish of Cetol, as has the teak handrail on the cabin top. The wooden rub-rail on the starboard side is almost done – gone are the grey patches, to be replaced by that beautiful brown teak look from the Cetol. Back to the inside, and all the cushions have vanished, with the exception of the v-berth cushions which are still fairly new – I might add that this is only temporary as new cushions are not too far away. The old ones were removed as we thought that with new carpeting etc, it was counter productive keeping the old contaminated cushions aboard.  No more radios, although a new VHF unit will be fitted soon, as soon as a practical spot is found. All in all, La Mouette is starting to look quite nice, although lots more work needs to be done to get it to where we want it to be. Visual changes are one thing but possibly the biggest change noticeable is the smell. The very first time we stepped into La Mouette’s cabin, the first thing that hit us was the smell, a horrible cigarette smoke smell combined with salt and mould. We are glad to report that there is no more stale smoke/salt/mould smell. The new carpeting, plus the painting of a few lockers and the clean out in the engine compartment has totally transformed the boat. Hence removing the cushions – you can now notice the smell as you enter the garage! The smell hasn’t quite gone but been transported some 20 miles inland. At least it’s not on the boat anymore.

As usual, it’s the small easy fixes that have the most dramatic effects. Underneath the engine box sits an immaculately rebuilt engine, gleaming with its new paint work, but you would never know it. When you hit the starter button it still sounds the same, however, when you step though the companionway into the cabin and put your foot onto the step which is the top of the engine box, you immediately notice that there is a new piece of carpet there. Similarly, while sitting down at the dinette looking aft, you notice the new carpet and how dramatically it has changed the interior. Under the dinette the carpet has also been replaced with the same blue ribbed carpet that sits on top of the engine box 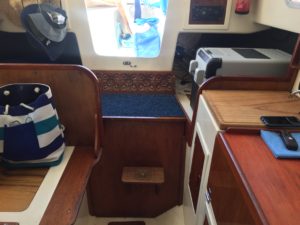 Added to this is the new hull carpeting in the dinette, and the boat has a whole new look and feel, and smell. The old hull carpeting was pretty gross to say the least. I am not sure if it was the original 40 year old carpeting, or if it has been replaced at some stage but it was pretty grungy – with lots of mould, cigarette smoke, salt and other assorted contaminates. 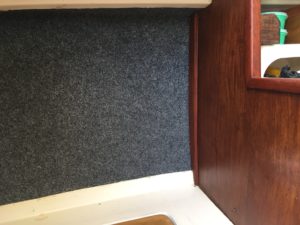 I would imagine that the cruising life style consists of the day time spent sailing, or exploring on the land, or even fixing things on the boat, whilst the nights would be spent inside. If it’s a rainy day, then most likely the days will be spent down below also. Therefore, having a nice homey interior is important. It stands to reason that a lot of boat work should be devoted to the beautification of the interior and trying to make it as attractive as possible.

Last week I took some leave to have a go at fibreglass repairs on the stanchions. The port forward stanchion had seen a bit of action in the past and the top screws had ripped right out of the fibreglass. A makeshift repair with silastic had been done but it was time to bite the bullet and get it fixed properly. 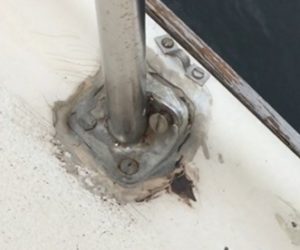 It was an interesting week and despite grand plans of fixing 4 stanchions plus a few other holes, it basically took the whole week to get just one of them done. We stayed on the boat for the most part, and although we were still in the marina, at night with the curtains closed, you could imagine that the boat was anchored off Refuge Bay!

The stanchion repair progressed from removing the stanchion and cleaning out the area, to grinding out the damaged areas and a few surrounding holes in the fibreglass. 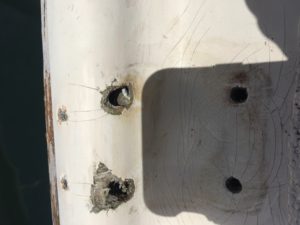 Following on from the grinding was the actual laying in of polyester resin and chopped strand matting (CSM), then a bit of filler to get the area smooth. 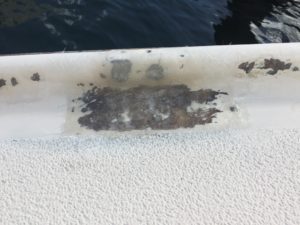 Once I was happy with the repairs, the gelcoat was next. This was always going to be a problem due to the original gelcoat colour “Compass Beige”. I had a pot of cream tint from Whitworths, and in the tub mixed with the gelcoat, it seemed to look OK, but on application, it was different. I ended up gelcoating a large area as I was fixing up a few holes and divots as well as the stanchions. It took several goes to get it right but in the end I was happy, although there were still a few imperfections. 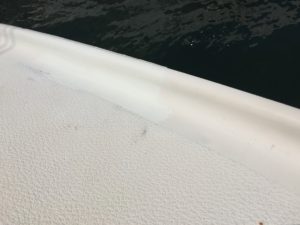 The last bit was the actual rebedding of the stanchion. This involved drilling and tapping new holes and sealing the holes once all was screwed in. If I may say so, it didn’t look half bad and more importantly, it was quite strong as well. 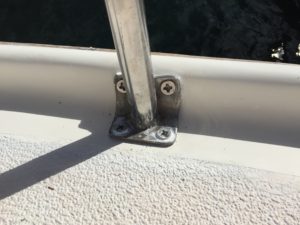 That’s one stanchion done and another 3 or 4 to go! Good job I bought a litre tin of polyester resin. But more of that next time.